Spent a large part of the day pulling together the paperwork for an insurance claim relating to my current situation - got the last piece of paperwork I needed from the Jobcentre yesterday, so today was all about checking and re-checking that all the information was there, scanning everything to ensure I had a complete record of everything that had been sent, then off to the Post Office to get the bundle of documents sent Special Delivery to make sure it all reaches its ultimate destination.

Had my first response to a job application today - not the response I wanted as I was not even shortlisted for interview. Disappointing, as I think it is a role that I would have been well suited for, but I think demonstrates the need to be more focused and tailored in the applications I make to ensure that my specific talents and 'fit' for the role comes through more. This was an application I submitted some time ago, while I was still working, so probably dashed it off a little bit quicker than I should have done. But you learn as much (if not more) from your failures as you do from your successes, so we move on.

And you Stay Positive - which as well as being the lesson for today, is also the title of the last studio album by the wonderful Hold Steady. Their latest disc (called 'A Positive Rage') dropped through the letter box this morning, a live album stemming from their 2006 tour of the US, in support of the 'Boys and Girls in America' album. Accompanying the CD is a DVD, including a documentary made during the same tour.

Those of you who have been around since Day 1 will already know that this blog takes its title from a Hold Steady song that has a lot of resonance for me - see here. They are a band that I've grown to love over the last couple of years - I saw them for the first time at Glastonbury in 2007, where they lightened the mood of a very wet and dismal Friday with a performance that just about blew away everyone else I'd seen that far. I've seen them twice since, in Liverpool later that year, and also in Manchester last December. Both times they just confirmed my belief that they are one of the best live bands around at the moment, not least because they actually look like they are enjoying themselves on stage, and want the audience to enjoy themselves as well.

Here they are performing 'Stuck Between Stations' on TV (is that Letterman?) in the
States.

I think you'll agree they're not the prettiest of bands, and Craig Finn is clearly not a classically trained singer, but it's the rough edges that make the band as likeable as they are...and the feeling that if Craig Finn can do it looking and sounding the way he does (sorry Craig), then there's hope for all the other rock band wannabes out there - me included! 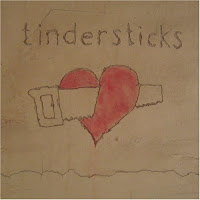 All of which should not detract from today's soundtrack, which is provided by Nottingham's Tindersticks. 'The Hungry Saw' was one of my favourite albums of last year and is worth investigating further. Deceptively laid back, the album covers a number of noirish themes, but the overall melancholy feel of the album is leavened by the quality of the singing and the strong melodies of each song. Stripped back, but compelling, the album suits quiet contemplation in the early hours, probably nursing a single malt.

Here's an acoustic version of the title track for your delectation.

So all about music today I'm afraid - I spoiled you with the soup recipe yesterday (which was delightful, you'll be pleased to hear) so no recipes today. However Mrs W and I have been planning for Easter and I shall be experimenting with a fish bake over the holiday - so watch this space!
Posted by Paul Waring at 4:44 pm

Keep your chin up