So tonight it was the 3rd/4th place playoff game for the FA cup I believe...although there might have been something else at stake as well from what I hear. We were hoping for a bit more action than there had been the previous night in the Chelsea - Barcelona game...and there was, although the game was by no stretch of the imagination a classic. Arsenal will probably feel the happier of the two teams, in that ManYoo should have been out of sight by half time, so getting away with a 1-0 defeat keeps them in with a reasonable chance of making the final. They'll have to play an awful lot better than they did last night though, particularly in the final third of the pitch. 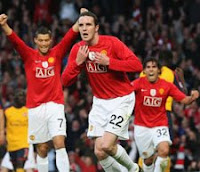 Manuel Almunia kept them in the game in the first half, although there was little he could do about the goal, scored by the much maligned John O'Shea at the far post with the whole of the Arsenal defence pulled out of position.

So after the first legs, both Champions League semi-finals are nicely poised, all four teams in with a chance of progressing through to the final. Which will make for entertaining viewing next week, hopefully.

In other football news, the application for FA Cup final tickets has gone in. We may suffer due to the fact that some of the tickets applied for have less qualifying games than others, but at least the application is in (thanks, Keith!) and we'll find out in a couple of weeks time how successful we've been.

Out first thing in the morning to do the weekly shop. Sainsbury's at Cheshire Oaks got the nod this time as my Helsby Tesco protest rumbles on, and a mighty fine experience it was too, insofar as any trip to the supermarket can be 'fine'. But the place was empty (one of the advantages of being off work is the ability to get to the shops in off-peak times), everything I wanted was there and the whole palaver was over and done (home and unpacked) before nine.

Rest of the day was spent in front of the computer, looking through the jobsites and smiling wryly at the growing fuss over the latest health scare to drive us towards the apocalypse. Unfortunately for the newscasters, not that many people are actually dying yet, and no doubt this scare will go the same way as the avian flu scare a couple of years ago - quietly dropping off the radar as the next Big Issue comes in to take centre stage. Simon Jenkins in The Guardian pretty much nails it I think.

Oh, and there is no way I am going to post the 'swine flu hits Liverpool' picture that my lovely wife has just emailed to me!

Other than that, the day was largely frittered away playing computer games. My mission to save the world(s) continues apace, and I am currently at sea with a mildly disinterested crew, heading towards a shoal of cannibalistic mermen and a tribe of flying creatures who are in some way critical to my task.

No way for a grown man to behave, I know. Especially in the guise of an 18 year old girl! 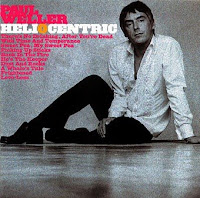 Playing in the background is Paul Weller's 'Heliocentric', one of a succession of interchangeable albums released by Weller in the early 2000's. I've been a fan of Weller's from his beginnings in The Jam, through the Style Council years and his later days as a solo performer, and there is always some quality in his work - when he is good, he is very, very good indeed - one of the UK's best and most consistent performers of the last 30 years.

However there was a spell from Heavy Soul in 1997 onwards where Weller seemed to be going through the motions - a spell that was only halted by the release of '22 Dreams' last year where he seemed to recover his muse and, more importantly, his fire and drive. This followed his performance at Glastonbury in 2007 that I thought was really disappointed. I've seen Weller live countless times over the years, but I'd never seen him on autopilot before.

This is Weller on far better form, a rare clip of him performing Weaver and Town Called Malice back in 1993 on the Jonathan Ross show. Shame about Mr Ross's contribution though...