Today's soundtrack: Dr Feelgood - Down By The Jetty

Well, in stark contrast to yesterday, I've not stopped today!

Up early this morning to trawl the job sites (nothing doing, obviously) and to get my paperwork together in advance of signing on just after lunch. Needed to get them to sign off on a particular piece of paperwork today, and despite half expecting to be pushed from pillar to post, the lady who signed me on was very happy to do the necessary while I waited. So again, it's not the most pleasant of experiences, but it has been remarkably painless (and quick) both visits so far.

And they are going to give me money as well!

Before setting off, I finally got round to confirming the green light for Latitude this year, so got the ticket bought post haste - and happily one of the lightweights I referred to a while ago (See Day 9) turned out to be far less lightweight than expected so I've got some company as well! Just need to work on the other two 'Musketeers' now - you know who you are! 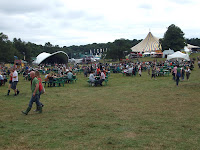 Last year, Latitude was a real highlight for me - a nice, compact festival in (generally) decent weather with a good range of bands and a remarkably strong lineup. The headliners were excellent, but the real joy was in discovering some real gems on some of the smaller stages. And getting our picture taken with Seasick Steve, of course. This year the lineup is slightly (but only slightly) less appealing than last year, but there's a lot of acts to be announced yet.
My Latitude photo album can be found on Photobucket here if you're interested. 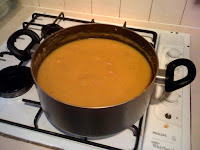 After signing on, I headed off to Northwich to pick up the raw ingredients for tonight's culinary masterpiece. I hinted at carrot and coriander soup, but Mrs W put in a request for some ham & lentil soup instead, so that's what we shall be having, with some thick lumps of home-made bread (baked a wholewheat loaf last night - bit 'heavier' than the others, but a delight toasted and will set the soup off perfectly.)

You don't want the recipe for this as well, do you? Really? Oh, ok then.

Take a gammon or bacon joint (smoked or unsmoked - your choice) and wash it under cold water to reduce the saltiness. Cover in a big pot with boiling water (might take a couple of litres), and boil the joint for an hour or two, until the meat is tender and starts to break up easily. Remove the meat ands set to one side - you'll need it again soon.

Add a couple of chopped onions to the pot, along with three or four chopped sticks of celery and the same number of chopped carrots. Cook until the carrots begin to get tender, then add a decent cupful of split red lentils (check the pack - they probably won't need pre-soaking, but just make sure and soak if necessary). Continue cooking until the lentils and veg are tender - probably another hour or so.

NB: you can cook the veg along with the meat if you want - will all be blended at the end so it's difficult to 'overcook' the veg.

Once you're happy with the tenderness of your veg and lentils, do the whizzy thing with your hand blender to get your desired consistency. Taste and season although you shouldn't need any salt.

While your veg are cooking, and when the meat is cool enough to handle, take as much as you want to return to the soup and pull it into 'flakes'. It's far nicer if you do this by hand rather than cutting into cubes - but if you prefer cubes, be my guest. Add the flaked/cubed meat back to the blended soup and heat through until you are happy.

You can add herbage and cream if you want but really, it doesn't need it.

Easy stuff, honestly. Takes a long time to cook from start to finish but there is very little actual 'cooking' involved - just chuck stuff into the pan when necessary and let it look after itself. 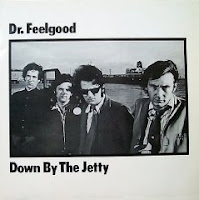 Dr Feelgood's brand of rhythm 'n' blues is stripped down to the bone, and so much the better for it. Down By The Jetty is their first album - recorded in mono in 1976 - and the short, sharp songs were the precursor to the punk explosion that was just round the corner. The original (and best lineup) had Lee Brilleaux on vocals and harp (no, not the big stringy thing), Wilco Johnson on guitar, John B. Sparks on bass and The Big Figure behind the drumkit. The whole group was tight as a gnat's chuff, not an ounce of fat anywhere and no more notes played than absolutely necessary. Brilleaux (now sadly deceased) exuded anger and tension in his trademark off-white jacket and narrow tie, as tight as a wound spring. Wilco moved around as if on rails, manic stares in all directions, wielding his guitar like a machine gun, seemingly playing rhythm and lead at the same time. The engine room kept the beat sharp and tight. But rather than me try and describe it, just listen here or watch below. And learn - just how lean and focused rock and roll can be.

Glad to have exceeded your expectations and turned out to be far less lightweight than expected. I can't see you managing to persuade the other two 'Musketeers' to come along. One of them will require the building of a 5 star hotel in the middle of the field! However I never thought Mrs D would give me a pass for the weekend so you never know....