So there I was, happily Twittering along with the select few, when all of a sudden there was a massive influx of followers and following, courtesy of a whole bunch of Glastonbury-goers (yours truly included) using a 'mass follow' utility set up by the Glastowatch people.

So hello to any of you fellow Glastonbury watchers (and goers) who might have found their way to this cobwebby corner of the interweb - nice to meet you!

Hold on Paul, the rest of you are saying, what's all this Twitter nonsense? Does it have anything to do with that update thing on the side of the page? Well yes, it does actually. And where have you been for the past six months if you don't yet know what Twitter is? I described Twitter to a friend a while ago as being a combination of updating Facebook status, instant messaging and stalking. That sums it up for me.

I'm a bit overwhelmed by the sudden leap in the number of Tweets coming through though - need to start organising things I think. So I've downloaded Tweetdeck to see if that can help me make any sense of the deluge. Will let you know if it works.

What it does do is bring home the fact that Glastonbury 2009 is fast approaching, which is very much a good thing. Assuming the weather behaves itself. And even if it doesn't. With the lineup appearing to be targetted this year at the more, ahem, mature festivalgoer, it is bound to be Dadtastic! And there'll still be plenty on for ver kids as well.

So what's been going on today then Paul?

Well, the sun has been cracking the flags so, unable to put it off any longer, I've been out in the garden. Gardening. Yes, I know. Now Mrs W - I love her bones, and especially her desire to feed, and joy in feeding, the local wildlife - but it does cause a little bit of a problem under the 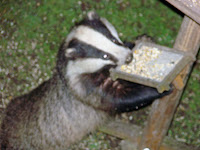 birdtable. You see, the birds and squirrels don't actually eat all the seeds that Mrs W puts out. What they do is chuck loads of them onto the ground underneath the table, where they tend to sit and rot. Impossible to shift them, other than to periodically dig out the steaming, pungent, fermenting and decaying glop that is produced. That was today's job. After mowing the lawn, it looked like we had a pitcher's mound under the birdtable. Still, the job needed doing, and this time it shifted reasonably easily. After spreading some of the muck around, and putting some edging onto one side of the lawn, things do look reasonably presentable now, although we are not talking bowling green standards here.

When all's said and done though, I'd far rather have the visits from the local badgers, squirrels and birds, than a pristine lawn and no wildlife. Oh, and a happy wife as well!

As I type, the FA Cup semi final is standing at 1-1, although of course the result is academic as the eventual winner of the cup will obviously come from tomorrow's game between the mighty Blues and that other lot. Team Waring is off to Wemberlee at 8:45 tomorrow morning, armed with a nice packed lunch, something 'nice' to drink and a mass of expectations, which will no doubt be smashed against the cold, hard rocks of reality at about six o'clock tomorrow night. Still, that's what they said in 1995 as well. Come On You Blues!

It looks like ManYoo will be fielding a somewhat 'weakened' team, and if the rumours are correct The Boy won't be playing, which should help the atmosphere to an extent. I'd say our chances hover around the 'slim' level, but if we get into them and don't try to sit back and sneak a winner you never know...

Full match report in the next blog post, which will in all probability be Monday morning, unless I'm too excited to sleep when we get back!

Hope it's not an omen that it's that archetypal bunch of Mancs, the Mondays, playing on the soundtrack as I type. Pills 'n' Thrills was the high point of their brief but meteoric career, and whether the creative spark came from the band, the production team or the addled mind of Mr Shaun William Ryder, it stands as a monument to the excesses and creativity of the time. A version of the band is doing the rounds this year, so if they turn up at Glastonbury they might be worth a punt.

Anyway, here they are at the G-Mex back in 1990 performing 'Step On'. Note Rowetta, later of 'X-Factor' fame, on backing vocals.

You're twistin' my melon, man!

I was the finance wallah for nearly 12 years at G-MEX but this was before my time. One of "the girls" who worked for me went out out with Shaun Ryder. Think she had a lucky escape.

Remind me tell you a rude Albertos story over a pint one day...