Today's soundtrack: Everything But The Girl - Idlewild

Ok, today it started getting a bit dull. Partly my fault - a lack of motivation - but once I'd caught up on the blog and trawled the available websites to see - yet again - that there's nothing new out there, the rest of the day seemed to stretch out into the distance. And so it proved...it's been a looong day. I need to get my arse into gear and get a touch more proactive I feel.

Anyway, I promised you recipes this time round, so here you go. After being singularly unhealthy over the weekend, we're going to get some decent food back into us tonight by having some baked salmon with brown rice. Dead easy, very very tasty and pretty good for you as well. 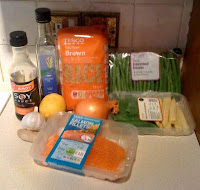 A couple of salmon steaks, baked in foil parcels in the oven. Take a couple of sheets of tinfoil and fold them up into little parcels big enough to hold a salmon steak each. Oil the parcels with your oil of choice - I like to use sesame oil to give an oriental touch to the meal, but you could use olive oil or any oil that can stand a high oven temperature (ie don't use butter). Lay each salmon steak onto the oil (will stop it sticking to the foil) and add your seasonings of choice...up to you, but I would generally crush a clove of garlic over the steak, add salt and pepper to taste and squeeze a generous amount of lemon or lime juice over as well. Soy sauce or teriyaki sauce also work well - or a splash of white wine - but be careful of overpowering the salmon. Just a splash of liquid - you want to steam your fish - not boil it!

Fold your parcels up so none of the juices can escape and let them cook in a hot oven for around 20 minutes - which is about the length of time you'll need for your brown rice to cook, so set your rice to boiling as you prepare your salmon parcels. Obviously you can use regular long grain or basmati rice, but the nuttiness of the brown contrasts nicely with the salmon and is, I think, a better choice for this meal.

While your rice and salmon are cooking, prepare your veg. Again, use what you want - tonight we're having some green beans, some mange tout and some baby sweetcorn. You will also want some onion (spring or regular), garlic and maybe some ginger to add flavour to your veg. Ideally you want something with a bit of crunch to it. Retain the crunch by stirfrying the veg briskly, and when cooked combine with the cooked brown rice in a wok or similar.

Plate up the rice/veg mixture and place your salmon steak on top. The juices from the salmon parcels should be retained, and used to dress the meal.

And that's it! Infinitely flexible and healthy as well.

Finished off the broccoli and stilton soup (see Day 11) for lunch today, so need to crank up the stockpot again soon. Look out for the carrot and coriander recipe later this week...

Idlewild is a nice gentle soundtrack to today's blog. It was released before EBTG discovered dance music, so represents their fey indie period when it was largely just the two of them, an acoustic guitar or two and some light accompaniment. Nothing too noisy.

As always (almost), it's on Spotify here and the video for the lead-off track, 'I Don't Want To Talk About It' is below.

You'll no doubt know the Rod Stewart version best, although it's been recorded by many different artists over the years. The Rod version was a Number One in 1977, although (allegedly) it was being massively outsold by the Sex Pistols' 'God Save The Queen' at the time. In Jubilee year, it is widely believed The Man could not countenance a Sex Pistols song at the top of the charts, particularly one that had such a blatant pop at Her Maj.

And 32 years later Johnny Rotten is on our screens selling butter. How times change.
Posted by Paul Waring at 4:49 pm

Labels: everything but the girl, recipe, salmon


anyway, he still gets a cheeky "CUNTry life butter" thrown in that nobody really seems to notice!