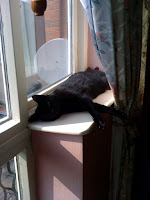 When I started this blog, I really didn't expect - or want - to be posting something like this. I did wonder whether I ought to post anything at all - but when I started, the intention was to record what was happening during my time 'stuck between stations' - for better or for worse. So bear with me on this - it might make me feel better anyway by the time I've finished.

Spent some time in Manchester on Monday having lunch with my ex-boss. Caught the train back to Delamere and drove home from the station.

As I was opening the front door, I heard a 'bang' behind me. I turned, and realised that our four year old cat had been hit by a van as she crossed the road to greet me - she'd been playing in the field on the other side of the road and had obviously seen my car pull onto the drive. I'd spotted her out of the corner of my eye as I pulled up but didn't worry - she'd been crossing the road safely for the last two years and was usually very wary of the traffic. This time, in her eagerness to reach me, she forgot to look.

I rushed over to her and picked her up. She was still alive - I could feel her heart beating - but one look told me she wasn't going to hold out. She died in my arms a few moments later. 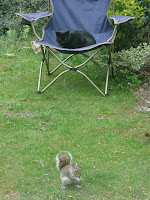 The van that had hit her had turned round and pulled up on the drive and the lady driver stopped to see if there was anything she cold do. It wasn't her fault - there was no way she could have stopped in time and she was obviously distraught. And she needn't have come back to check on Katy - but she did and I thank her for that.

Mrs W was due home so I waited for her to arrive, sat holding Katy on the front step. One look at my face and she realised what had happened. We took Katy indoors and laid her down in her favourite place. The following morning I got up early and we laid her to rest in the garden.

Those of you who aren't animal lovers may wonder why this was so upsetting to us. I think it is impossible to explain to those who don't 'get' it. All I can say is that she brought a huge amount of joy into our lives - especially Mrs W's - Katy was infatuated with her from the day she brought her back from the rescue sanctuary - she'd effectively chosen Mrs W to be her new owner at the sanctuary. In a house with no children around, she gave us something to look after, to care for - and she repaid us with her love and companionship. 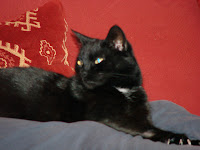 Why Katy Teabag? well, as I mentioned above, she was a 'rescue cat' and had been given her name before we collected her. She was rescued from a building site, where the workmen looked after her by feeding her tea from a saucer (hence the 'Teabag'). And the veterinary assistant who looked after her when she was first rescued was called Katy. Hence Katy Teabag.

Best wishes to Mrs W and yourself at what must be a very upsetting and emotional time.

As a cat owner myself (and a black cat as well) I totally get it.

Mrs D sends her best wishes as well as she had a very similar situation with her cat (pre Mr D ... she was Mrs S at the time) and she said that she had lots of tears and she feels for you both.

Hi Paul, I am really sorry to hear about Katy Teabag, I know how much you and Marina loved her.