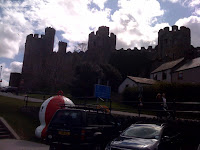 Up and out today, to enjoy the good weather while it lasts. Off to Conway (or Conwy, as the locals would have it) for a quick wander. A long, long time since I've been, and the first time for Mrs W. A very smooth journey - motorway/dual carriageway pretty well all the way now - I'm sure in years gone by the journey involved lots of single carriageway stuff. The journey along the coast road takes in some excellent views over the Dee estuary and the Irish sea as well, both resplendent in their 'blueness' today. 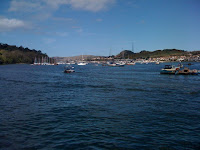 Of course, with it being a Bank Holiday weekend and all, Conway was packed and it took a while to find a car park (and then to generate some small change to pay for the parking). Once parked up, we wandered through the town onto the quayside where I was delighted to see that the 'Smallest House in Great Britain' was still there and that no-one had discovered a smaller house yet. I first 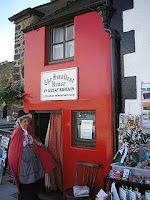 saw the house on a school trip to Conway back in the '60s - for some reason it made a bigger impression on me at the time than the castle itself did. Slightly confusingly, it was bigger than I remembered it.... Apparently the house was lived in until 1900, when it was deemed 'unfit for human habitation' which given the standards of the time must have meant it was pretty grim. It does beg the question though - if the house is 'unfit for human habitation' is it still reasonable to describe it as a house? In which case it might not qualify as the smallest in Great Britain? Hmmmm...

Wandered in the general direction of the castle but gave the full tour a miss this time around. In any event, Mrs W's stomach was calling out to her and we went in search of sustenance. Sadly, the options available to us either involved long queues or cramped seats so we decided to 'save ourselves' for our tea. Which tonight involves a lot of pre-prepared Tesco snacky stuff chucked into the oven.

What? Standards slipping, you say? Don't you think I did enough cooking last night? 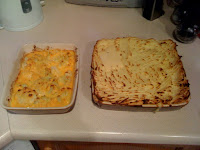 Last night's fish bake was very fine, I have to say, but hard work. Lots of pans on the go, especially when I decided to accompany it with another cauliflower cheese, which meant cooking up two separate sauces at the same time. Inevitably something had to give, and the cauliflower cheese was slightly disappointing, certainly when compared to the monster dish prepared a couple of weeks ago.

As I type, the footy results are coming through. ManYoo struggle to a somewhat spawny win at Sunderland with the young Italian kid scoring again with his first touch, and Chelsea very nearly chucked away a 4-0 lead, holding on to win 4-3 in the end. Oh, and Big Red buried Blackburn 4-0 earlier in the day. So still very interesting at the very top. Disappointingly, Arsenal also won, 4-1, but the scoreline doesn't really reflect the fact that Wigan led for most of the game, and that three of the Arsenal goals came in the last 20 minutes or so. That probably puts them out of reach, although there's the small matter of a game to win against Aston Villa tomorrow.

Toughter Than Tough is a 4-disc box set, covering Jamaican music from the early '60s through to the early '90s, tracing the music from its early calypso origins, through ska and rock steady, reggae and its variants (lovers, roots etc), dub and on to the toasting performers of the late '80s and early '90s. There's hardly a bad track in the set, although for me the series peaks on the third disc, which covers the late '70s and the reggae explosion that accompanied the punk era. Culture, Black Uhuru, Burning Spear and of course Bob Marley are well represented, but it's also delightful tunes like 'Uptown Top Ranking' by Althea and Donna that bring a smile to your face and a skank to your step.